As part of the Adults Services Programme, 2018 saw CLAPA launch the ‘Whole of Life’ Survey, a comprehensive questionnaire for adults in the UK born with a cleft.

We know that cleft lip and/or palate impacts on people’s health, but we also recognise that cleft can impact on people’s relationships with others in many different ways. We were interested to see if there were any patterns of relationships that tended to affect people with cleft more often than they affected the general population. So, we took a closer look at the interpersonal relationships of adults who were born with a cleft.

The ‘Whole of Life’ survey included a couple of sections which asked about people’s relationships with family, friends and romantic experiences. The results of this part of the survey fed into an academic paper published in the Cleft Palate Craniofacial Journal (CPCJ).

We’ve summarised the findings of this paper below.

We’ll be discussing the findings of this paper and what they mean for the cleft community in more detail on Monday 29 March at 8pm. Follow us on Facebook, Twitter or Instagram to find out more and join the discussion. 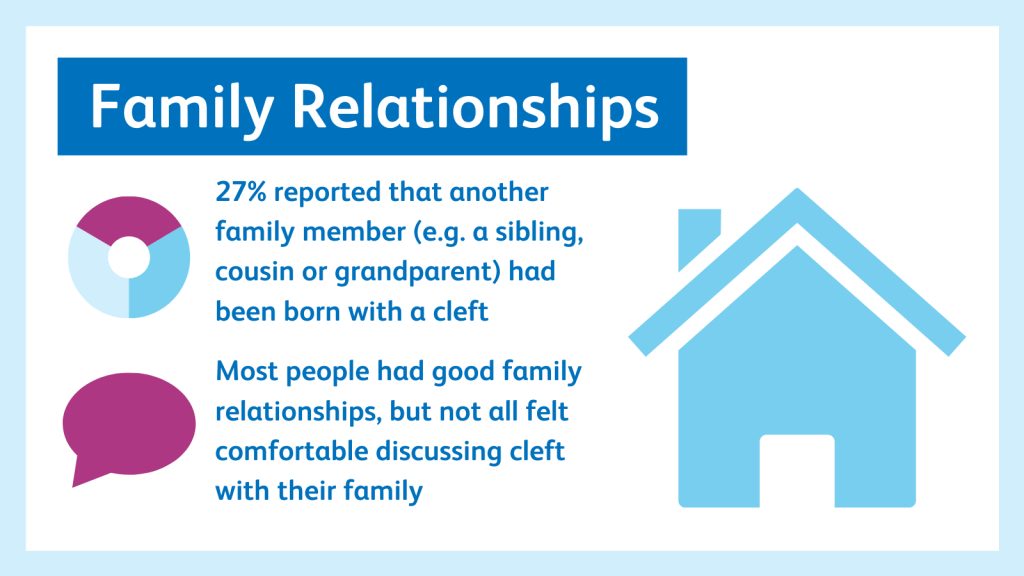 More than half (60%) reported that they currently had four or more close friends, and the majority (88%) rated these friendships as either ‘good’ or ‘excellent’. People were most likely to have made their close friends at work (50%), secondary school (45%), university (32%) or primary school (27%).

We also asked people questions relating to how sociable they are and compared this to people who were not born with a cleft. The people completing our study reported a significantly lower self-perception of social competence when compared to the general population. 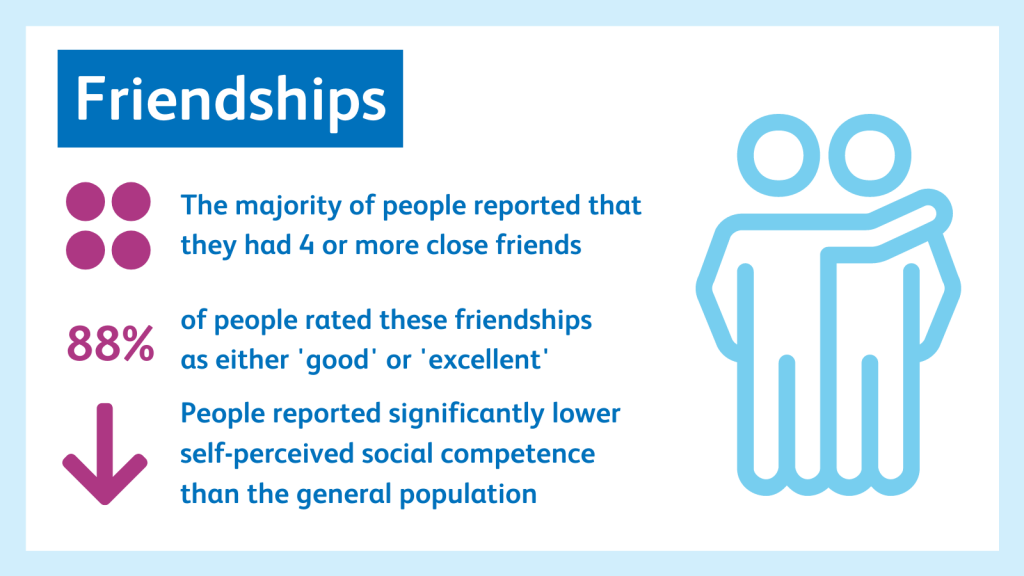 Meeting other people with Cleft

Most people (63%) had met someone else or spoken with somebody else who was born with cleft. 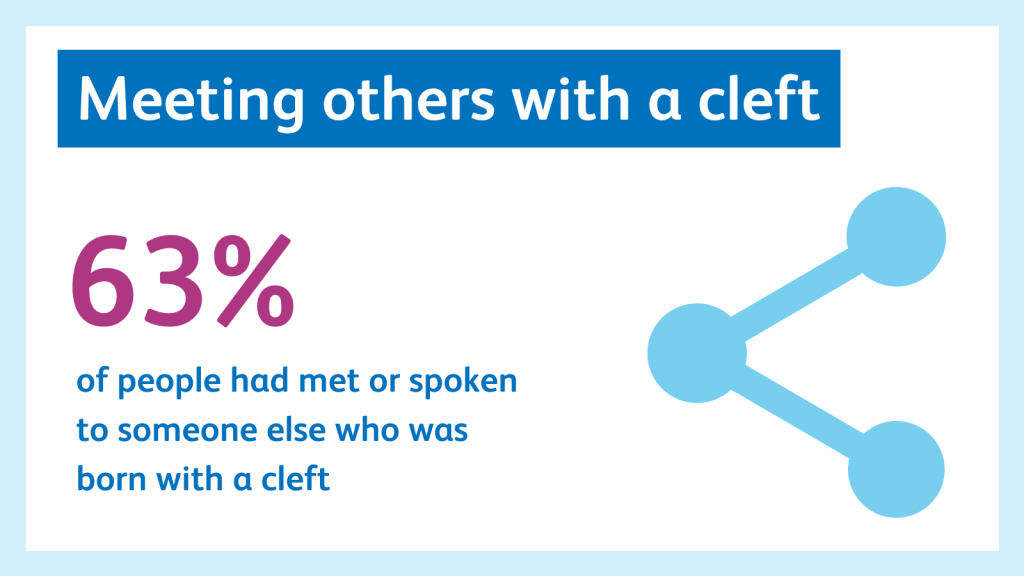 Warning: The following paragraphs in this section contain mentions of bullying, discrimination and abuse (including a mention of sexual assault).

A smaller, but still significant number of people (22%) reported that they had experienced discrimination. This was most commonly being mocked for appearance or speech (64%), not being provided with equal opportunities (51%), not being considered for a job (49%) or a job promotion (18%), or being discriminated against by a date or romantic partner (39%).

The effect of bullying and discrimination was long-lasting. People frequently said that this had resulted in them losing self-confidence, having a lower sense of self-esteem and self-worth, feeling shy, introverted, lonely or withdrawn, increased anxiety and/or depression, as well as a reduced sense of trust in others. Some people said that although these experiences had been difficult at the time, the experiences had helped them to become more resilient in the longer term. 60% of people felt that the government needed to do more to address discrimination in the UK. 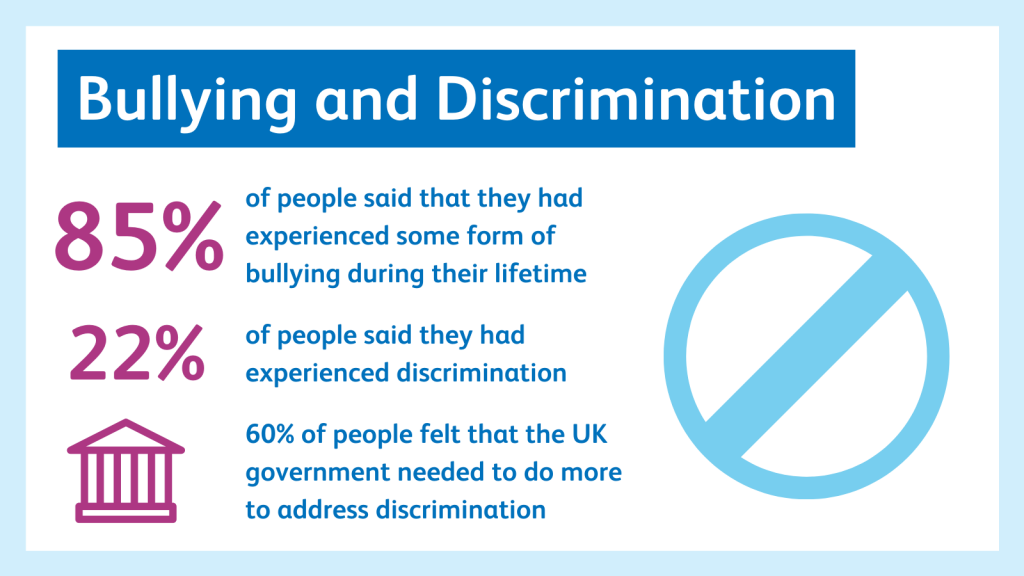 26% of people surveyed were single/never married while 67% were in a relationship of some kind. The remainder were either divorced, separated or widowed.

The most common way that people met their partner was through a friend (28%). Meeting in the workplace was the second most common way (19%) and online dating/dating apps were third (18%). Many relationships had started out as friendships and evolved over time (32%).

Most people agreed with the statement ‘I worry/have worried that I will never find someone’ and ‘I feel I lack confidence and experience when it comes to dating’. This was despite an overwhelming desire by people to be in a romantic relationship. Similarly to friendships, adults with a cleft reported significantly lower self-perceived competence in romantic relationships than the general population.

Those who were in a romantic relationship were asked questions to determine their satisfaction with their relationship. Sadly, compared to a sample of people in the general population, adults with cleft reported a significantly lower relationship satisfaction.

In the survey, we told people “In some cases, CL/P can be caused (at least in part) by a genetic link. This can occur in families where there is a history of cleft, although there can also be a genetic component in cases where only 1 person in a family is affected.” We were pleased that 90% of people were already aware of this, although 10% of people learned this for the first time when completing our survey.

46% of those who completed the survey had at least one biological child. Of those, 24% had at least one child born with a cleft. Most people (64%) felt that having genetic testing to know their chance of having a child with a cleft was important, while 16% said they would rather not know. 12% said they had not given the topic any thought. 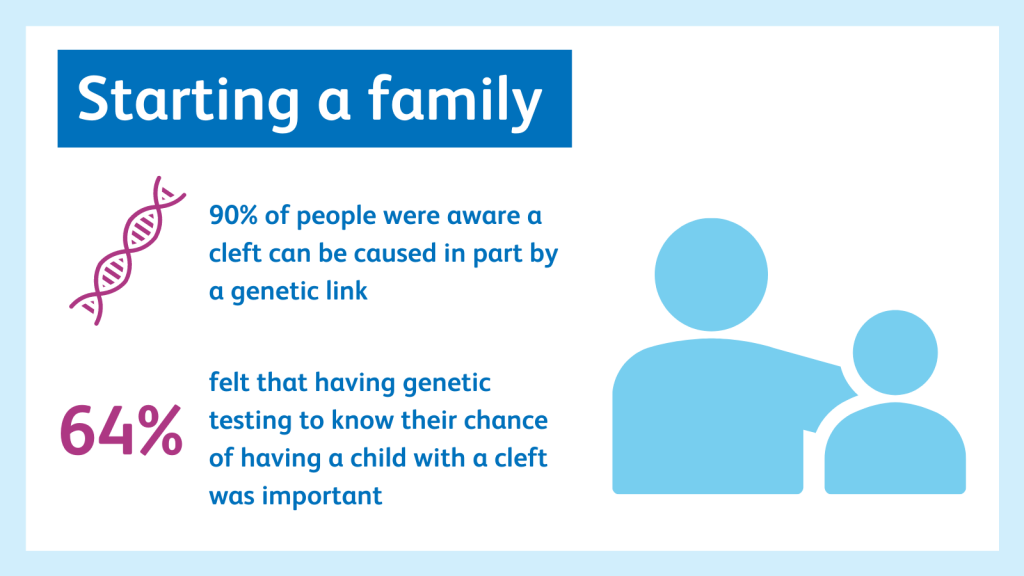 People who were born with a cleft overall reported having good family relationships and friendships, which was positive to find. However, the findings also suggest that while adults feel comfortable in their existing friendships, engaging in new friendships is something that many still find difficult.

The high rates of bullying and discrimination are concerning. While some people found this made them more resilient, many others found it had a prolonged negative effect on their life and impacted their self-esteem and self-worth, and make them more socially anxious. There is a risk that these experiences impact on future interactions and create a cycle of negative social interaction.

Many people felt inexperienced with regard to dating and intimacy. This is supported by previous research into cleft which has found the same feeling. People also were worried about the impact of cleft on functional aspects of cleft such as kissing and sexual intimacy. People reported being anxious in romantic relationships, finding intimacy difficult and tended to be less trusting of their romantic partner. Sadly, some people said they’d entered into unhealthy relationships as they felt they would not be able to attract anyone more suitable. This is especially concerning as a number of people reported having experienced emotional, physical and/or sexual abuse.

People in our study group also appeared less likely to have children than the general population, and the majority of people reported they had or had previous had concerns about starting a family.

In summary, individuals with cleft may be at risk of negative social experiences, which if not appropriately addressed may impact their emotional well-being in adulthood. Therefore, it’s recommended that clinicians working with young people with cleft consider doing routine assessments of social integration and work with schools to make sure that any social concerns are addressed as early as possible.

It is recommended that education for patients of all ages be provided around topics such as starting relationships, managing difficult social encounters, addressing workplace bullying and combatting low self-esteem. All these topics can be found in our Cleft Talk series.