We were on our way to Mayday Hospital for our 20 week scan on the 21st January 2012. Myself (Alice), Kieran (Dad) & our eldest Daniel, who was 3 at the time. I laid down on the bed and just expected the normal “it’s a healthy baby”. The scanner put the doppler on my belly and said would you like to know the sex, and of course we did we was so excited. BOY he said. All of us were over the moon, especially our eldest. “He has got really strong legs”, the man said, “could be a runner when he’s older”. Kieran’s reply was no he’s going to be a motocross racer, the man smiled. He then went really quiet all of sudden, and said to us “Have you ever heard of a cleft lip and palate?”. Kieran’s face went white as I looked at him he obviously knew what a cleft lip was. I hadn’t, the man then started to explain to us what it was, I felt heartbroken that my little boy would come out and have to go through surgery, but both me and Kieran kept our feelings hidden and our happiness showing for Daniel.

We walked out once the man had given me another appointment to see a specialist for a specialist 3D scan, his last word were I can’t be 100% sure he has because the little bugger kept hiding his face. So we got in the car went home and tried not to think too much of it.

The day of my next scan had come round, and Kieran had to work so I took my Nan along with me for support. Again, I went into the room laid down and instead of 1 person sitting there I had 6 people around me, all of a sudden it had been confirmed Ethan had a cleft lip and possible cleft palate. I began to cry to my Nan. Thank god she was there I wouldn’t have been able to do it without her. I couldn’t understand it, why? I don’t smoke, don’t drink, I eat healthy…So why?  So I had went home with a pack about clefts and abnormalities etc. Spent a long time crying and as it came closer to my due date I realised it could have been worse.

Due date came along 8th June 2012 8pm at night watching EastEnders with my friend Vicky and that was it labour had started, I looked at her and started crying “What kind of child comes on their due date?”, I said. I, all of a sudden, felt uncertain again. Well, poor Kieran, the only person I wanted with me was Vicky. I didn’t know how I was going to feel when he came out so I just needed my best friend by my side.

9th June 3.26am Ethan came into the world, and the lady placed him on me and all I remember out of that moment was he had the most beautiful eyes. The midwife went and took Ethan for a check-up on his palate and lip, I looked at Vicky and realised I was crying but I hadn’t even taken notice of his lip. The midwife came in and said he didn’t have a cleft palate I felt a huge relief. He looked so much like Kieran. Kieran, Myself, & Daniel finally had Ethan. We were so happy. 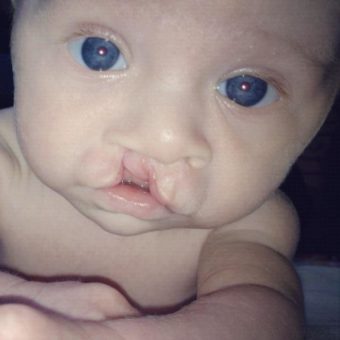 The next afternoon my cleft nurse came around explained the procedures and gave me “special squeezy bottles”, & that was it I was allowed home. So we all went home and settled. I took Daniel to school a couple of days after and remember the sickness I felt in case people said something. But Daniel’s pre-school teachers were all lovely and everyone so supportive.

For those first 3 months before the operation I only had one rude comment. And that was from a elderly lady that had looked into the pram on the bus, and gasped and said to me “What did you do wrong for that to happen to him?” I kept calm, but I felt sick so I got off the bus. People can be so rude, I was used to the stares but I didn’t really care. He was beautiful and we loved him.

The date of the operation had come along and Kieran and I had become so used to our Ethan with his special lip and big smile. He really did have the most beautiful smile. We didn’t want him to change, but we knew he had to for his future and for him! 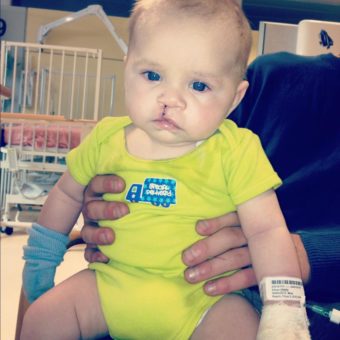 We got him ready for his surgery, went down to the theatre where I was being put under anaesthetic. I couldn’t take Ethan in so Kieran took him whilst I stood outside. Kieran came out and we decided to go get some lunch too take our mind of it. Those two hours have been the longest two hours of our life so far. But that was it we went down to get our beautiful handsome boy and he looked like a “normal” child.

So the years that have gone by he’s done pre-school and now he’s in reception. He is doing so, so well, the teachers are pleased and so are we.

He has honestly without a doubt turned into the most confident, happy, loving, caring child. Ethan has such a amazing unique personality, very cheeky like his dad, and he takes everything in his stride. We couldn’t ask for more. He has a big brother who loves him and will look after him and a little sister who he does the same for. They both love him unconditionally. I know that Ethan will walk through life easily, and every challenge he is given we will get through it as a family. Ethan knows that he was born different but he also knows that right now he is like any normal child just with a scar.  He’s our brave soldier, we have his gum operation left and his speech muscle operation. So a few obstacles are already put in place but he will be fine and as always he will come out on top and smile. Ethan has got an amazing support system, family & friends that we wont ever be able to thank enough.

All I’d say to anyone that finds themselves in the same situation is don’t google. It’s the worst thing you could do. Find a support system that works for you. There are loads of online forums to speak to other mums, like us, for example, Facebook. It really does help to speak about how your feeling. Just remember that the people that will be doing surgery and looking after you are there to help. Always ask questions, it’s better to know than worry yourselves.

Take every day as it comes and you’ll realise the hardest part of your journey will be saying goodbye to that smile.

Need to talk to someone? We have people waiting to listen.