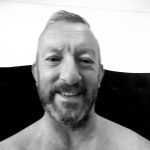 David was born in 1963 with a cleft lip and palate. He recently found out about CLAPA and the work we do.

As well as getting in touch about becoming a CLAPA Volunteer, he’s been kind enough to share his story in this interview, in the hope he can share some of his positivity with others in the UK Cleft Community.

David was very young when he first became aware of his cleft. Born with a cleft lip and palate in June 1963, he still has some memories of those first, early hospital visits and counts himself lucky that most of his bigger operations took place when he was very small, meaning he was finished with surgery by the time he was 12 years old. Later in life, his main treatments related to his cleft was dental work during his teens.

Whist his cleft was not necessarily spoken about by his family growing up, it wasn’t a conversation that was discouraged either. He remembers his childhood as shaped by wonderful, supportive parents and while details, like the date of his next operation, might come up in conversation, their differences weren’t really something they focused on as a family.

Difference was however something he remembers other children picking up on from time to time.

“There was no continued stuff,” he recalls. “It was more just random things, highlighting that I was different.”

He notes that children are sometimes quicker with derogatory remarks than adults who have had more life experience, and can be more aware of differences in general during school years.

“My teenage years were a bit harder but I think it’s an age thing.”

David regards these less positive memories as one-off moments in a bigger picture.

“You start to accept that there are some people who, when they talk to you, just don’t look at your eyes. You just think ‘here we go again’ and carry on.”

“It’s a big wild world,” he says fondly. “Eventually you have to leave your bubble and just get on with it.”

What can be difficult, David admits, is that it is so rare to meet another person born with a cleft. Whilst 1 in every 700 people born each year in the UK is affected by cleft, making the condition relatively common, it can feel insular he notes, to feel like you’re the only one different in this particular way.

He was surprised and delighted recently, when he found himself being served in a shop by a young girl born with a cleft .

“It was like a secret handshake and quite lovely,” he laughs. “I would have liked to speak to her about it a bit but she was busy working so I didn’t stick around but it was like a shared smile type of thing.”

Recognition like this is something David has been quite excited about since discovering CLAPA.

“It was like a secret handshake…like a shared smile type of thing.”

It’s only been recently, while looking into volunteering options, that he stumbled across the website and began reading about our work.

“It was great to find,” David says, as he is keen to volunteer so that he can impart some confidence. “I work with young people in building their confidence in my work and I’d love to be able to help young people born with a cleft to look at difference as a positive thing as a volunteer.”

In terms of the advice he’d offer young people born with a cleft, David thinks the main thing that’s helped him over the years has been accepting himself.

“You want to get someone to accept themselves, and that can come about in diverse ways, but that’s the goal.”

His theory is that once you accept yourself, that’s passed across to others. He still gets questions from time to time about his cleft, but with the confidence and resilience he’s grown into, it’s not something that bothers him too much.

“Decent people will accept you.”

Thanks for sharing your story, David. We can’t wait to welcome you as a CLAPA volunteer.

If you’re an adult in the UK born with a cleft, you can find out more about CLAPA’s exciting Adult Services Project here.

If you’d like to volunteer for CLAPA you can find out more here.