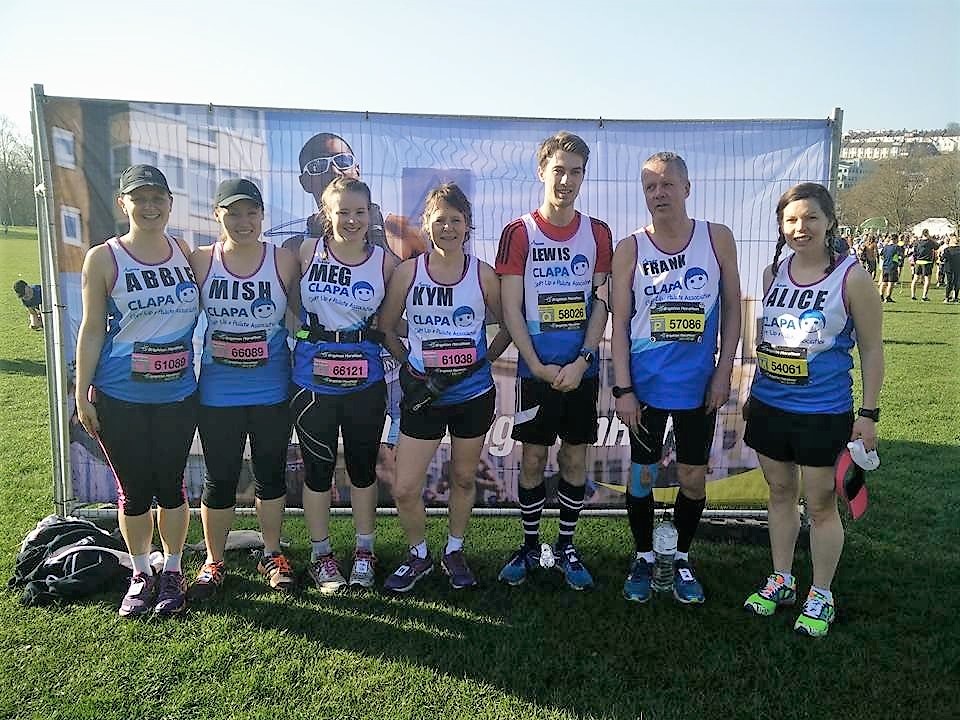 This Fundraising Friday we are saying a huge thank you to our wonderful team of runners who took the Brighton marathon last weekend! Read on to find out why some our team decided to get involved and how you can do the same! 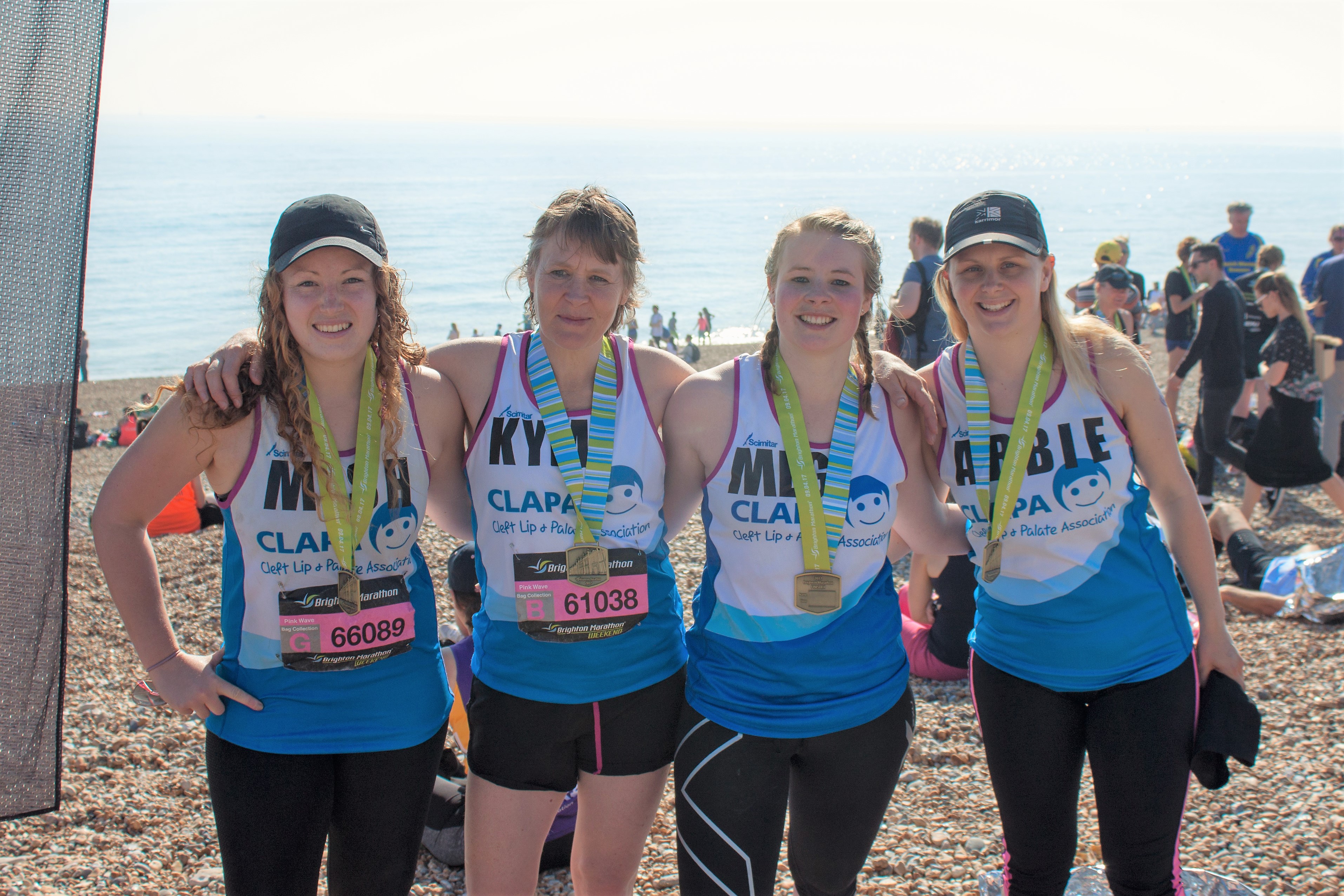 Thanks to Tom Howard for this photo!

I grew up in Brighton and many of my friends and family have already run this particular marathon. You can’t beat the course & the support from the locals that’s I’ve seen first-hand when previously running the 10k route.

My daughter was born with a cleft lip and palate and the support has been incredible. Over the marathon w/e Alarna choose the mini mile and I choose the marathon to raise funds and give something back. Alarna was born in 07 so running my first marathon 10 years on seemed fitting, she’ll also undergo her bone graft in just a few weeks’ time.

I ran with my mum who is an experienced marathon runner (her support was amazing) but also for me, knowing that I was achieving something I never thought I would. I’ve always tried to install in my daughter that her cleft should never stand in the way of anything she wants to do. I had her in my mind throughout the run and she even joined us at mile 24 🙂

I want to do it all over again! The training was tough but the marathon experience was incredible.

Eden and the team at CLAPA were amazing, I look forward to the next event I partake in for CLAPA.

The Brighton Marathon is unique in that it has a beautiful backdrop of the ocean, while at the same time it has the liveliness of a bustling city.

The city is so alive with support and cheer. Everyone, locally, and from afar, take to the streets to support and cheer. Whether it is your family on the side cheering you on or a complete stranger, you feel like you are part of a massive celebration. Connected and supported. The atmosphere is just incredible.

CLAPA is close to my heart because I have a beautiful little friend Alarna, who was born with a cleft. She is the daughter of my close friend, Abbie Hills (who also ran the marathon). Alarna has been supported throughout the years by CLAPA. By running for CLAPA was personal for me. It meant that I could support Alarna and her family.

While standing waiting to start the race, another runner, whom we did not know, came up to us and said ”As someone who was born with a Cleft I want to thank you so much for what you’re doing” Those random chance encouraging encounters are amazing. This is what running is meant to do. Bring people together.

I kept thinking of the feeling I would have as I crossed the finish line. Victory!

It also helped to think of the people that are close to my heart. I knew I was making them proud. Between mile 21 and 22 I looked to supporters on the side who gave me cheers to keep going. That certainly helped.

Apart from the achy muscles and sore joints haha? I feel so proud that I now get to say ‘I have run a marathon’. I’m also very tempted to run it again!

CLAPA’s support was great. I got a very encouraging note leading up to the Marathon. And on the day, Eden came through to cheer us on. I was gladly about to spot him while on the run and managed to score a high-five. He also spent the day standing in the sun waiting for us to finish. Clapa has been great the whole way through. CLAPA is more than just a charity, feels like a family 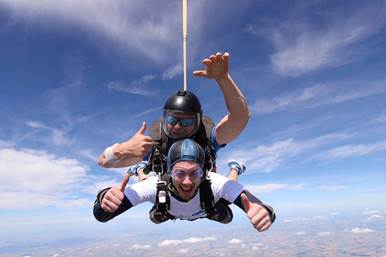 I chose the Brighton marathon as it’s somewhere I’ve never been before and I thought it would be nice to be able to see a bit of Brighton while taking on the challenge!

I’ve supported CLAPA for a number of years now having been born with a cleft lip and palate and I’m extremely passionate about raising money and awareness for a charity that has helped myself and my family and continue to do so.

I kept myself focused and when I needed a moral boost the crowds on the street were amazing and also my family that had come to support so it was amazing seeing them ! I also had continued support from my brothers who couldn’t make it and was reading their messages while running on my iwatch.

It left me with such a high and felt and incredible amount of pride, I still can’t believe that I took on a full marathon it’s something that I will never forget.

The support I received from CLAPA leading up to and on the day was amazing I was so driven and motivated by the team and when I got talking to the other runners also taken part for CLAPA it felt like a really special team to be a part of. 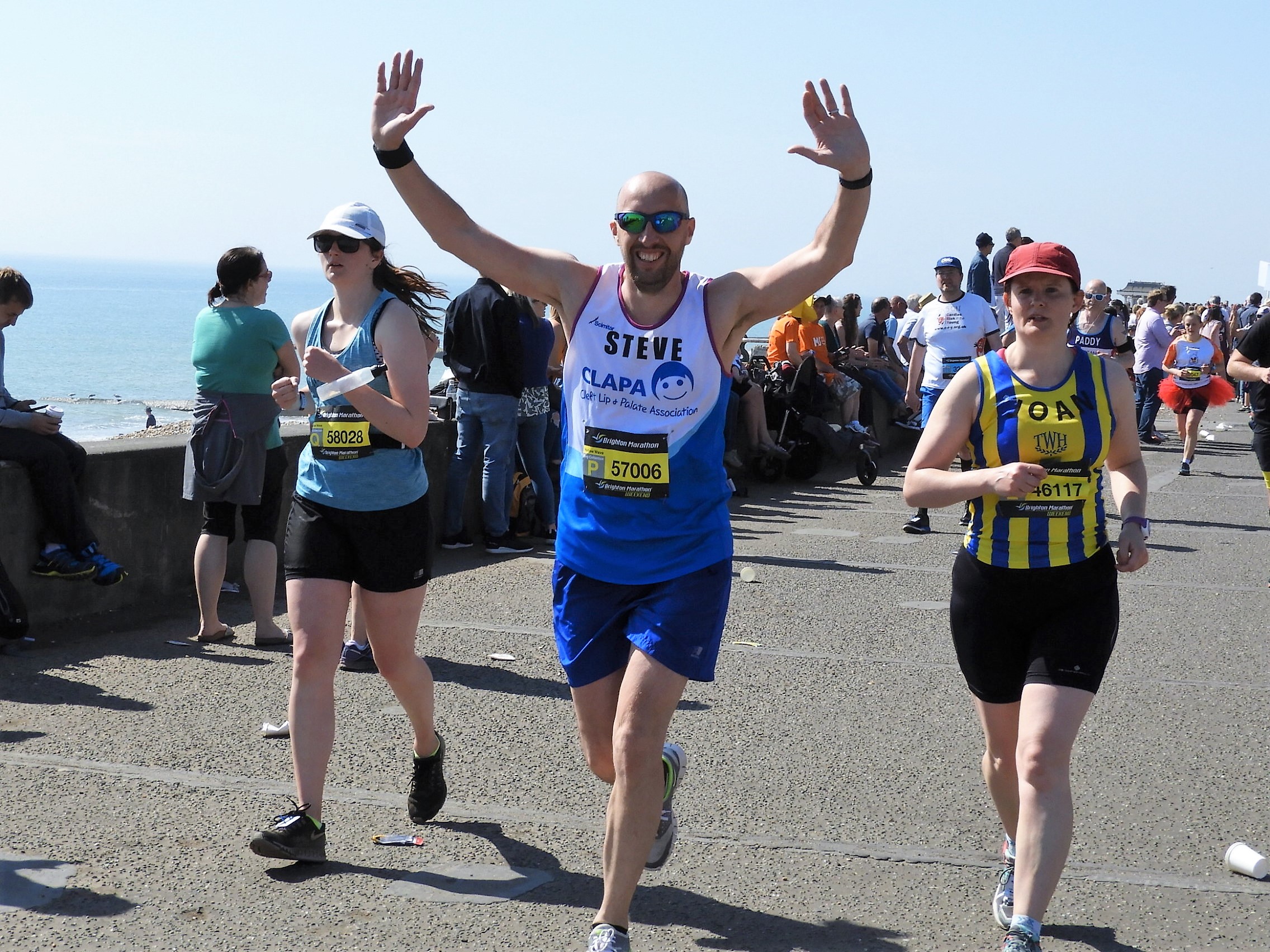 Why are you supporting CLAPA?

I am supporting CLAPA along with some other charities that have been very supportive to my family and I with 2 of our 3 son’s.  Samuel was born with a unilateral cleft lip and we have received continued support from CLAPA since it was spotted at our 20 week scan!

I ran the Brighton Marathon because for the 2nd year in a row I didn’t get a place in the London Marathon by the ballot and running a marathon is something on my ‘bucket list’.

What training did you do for the Brighton Marathon?

I have not intensively trained if I am honest, however I have significantly upped the level of running I was doing before.  I am a member of a boot camp and regularly participate in OCR’s (obstacle course racing) so already had a good level of fitness, I have just had to push myself to run for longer distances than I am used to.  I moved near the coast in December so 90% of my runs since Christmas have been by the sea which is incredibly relaxing and peaceful.  I also do nearly all my runs with my neighbour who is also running the Marathon as struggle to run on my own through boredom!

What did you focus on during the difficult sections of the race?

I am a very competitive person so I didn’t allow myself to quit (unless of course through injury) and I focused on spotting my friends and family who were coming along to cheer me on.

How did you feel on race day?

I was quite excited but in total honesty was more concerned about getting there on the day before to register and then on the day itself as the Park and Ride sold out and there was a train strike!

What advice could you give to people?

I don’t see myself as any kind of expert at all, however for me personally finding a running partner has been absolutely essential. I could not have done most of my runs without having someone to run with as it has prevented me giving up.  My longest training run was 2 weeks ago and a 20 miler, 6 of those miles along the coast was against horizontal wind and was absolute agony.  Without a shadow of doubt, had I not been with my running partner I would have given up!

I just want to say a big thank you to everyone, they helped me through the gruelling miles of the marathon through their support. 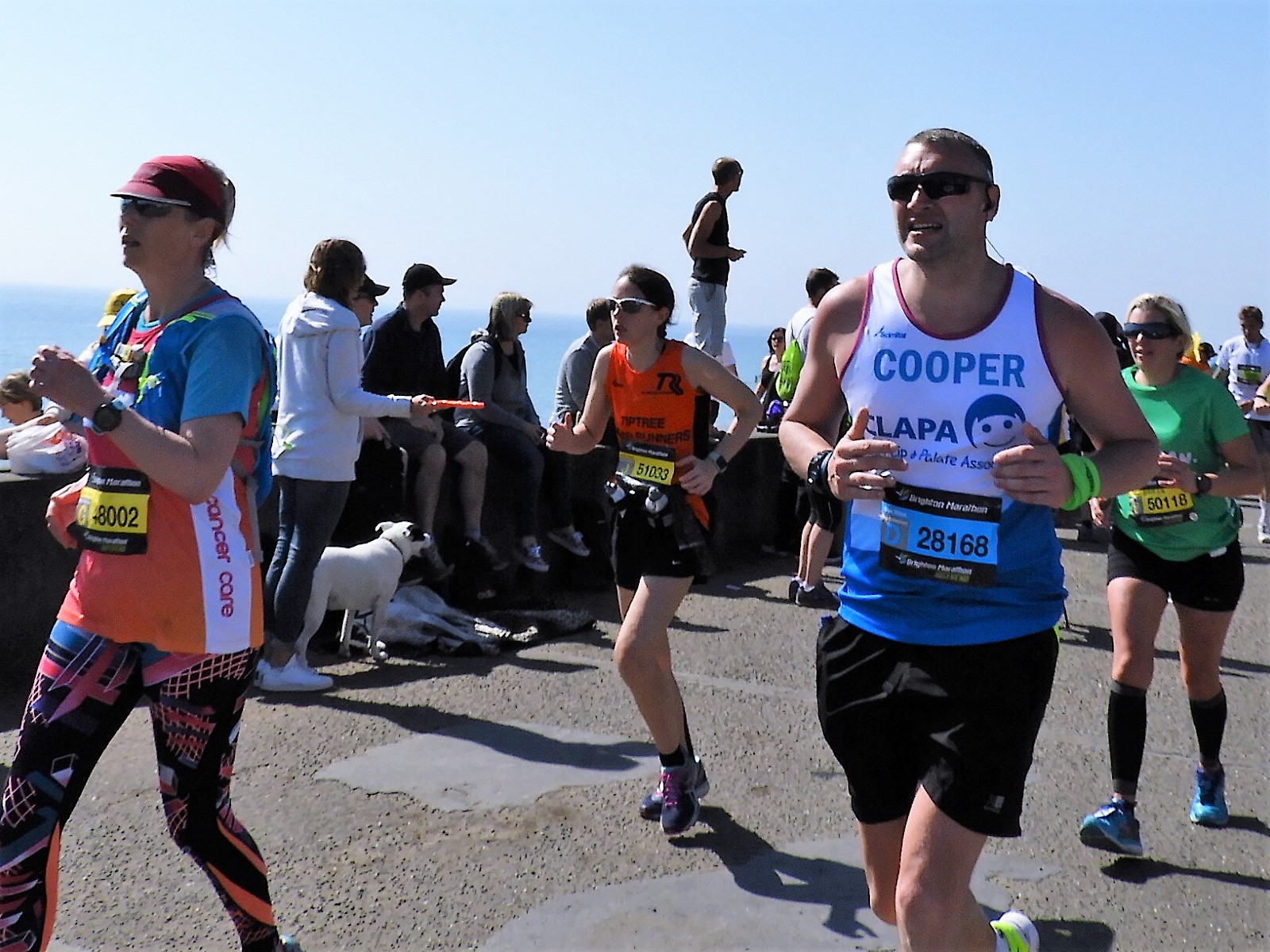 I ran the Brighton Marathon along with my good friend Jonny Hartley. Jonny has done a few marathons now and wanted to wear a vest so more people saw it, he didn’t do fundraising himself however a large number of our donations came from mutual friends who knew that he was also running supporting CLAPA. We did this for Clapa as my son Cooper was born with a Cleft Lip on the 13/03/14.

I ran for Clapa as they are a great support for parents of children born with Clefts. On our 20 week scan Cooper was diagnosed with a cleft, due to the time of the scan there was no one to speak to about the condition. We went home and as you do googled the condition. We then looked at the CLAPA website, this was great. It was full of “accurate” information and gave us answers to our worries. Having stories from other families that had gone through what we were about to really helped.

The race was very hard, I had done training and was confident in a sub 4hrs time. As soon as I hit 10 miles I knew that would be a push just from the heat that day, at mile 14 the tendon in my right foot began to hurt. From mile 18 I was in a lot of pain from my tendon, cramps also set in due to the dehydration (think my face in the photo shows that). Having Coopers name on my race top and hearing the crowd say things like “Cooper keep going,  you can do it” got me through the last 8 miles. Cooper has taken everything in his stride, from all the hospital appointments to the surgery and his recovery.

The marathon was by far the most I have put my body through, it’s mentally and physically draining. But the feeling once you complete the race is unbelievable, it’s a great achievement.

CLAPA were great, supplying the race vests and setting up a Facebook page for the runners to talk about their fears and give training advice.

I wish we could have stayed to meet you at the CLAPA tent however it had been such a long day for Cooper and we needed to get him home – that and I could barely walk!!