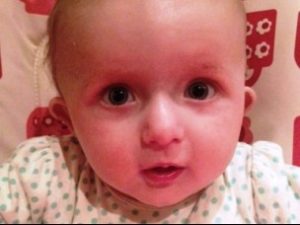 “We were delighted to discover we were expecting our second child in the summer of 2011. I had a fairly straightforward pregnancy and normal scans throughout. Our daughter Isabelle was born on 21st April 2012 at 00.52AM, coming quite unexpectedly on her due date. Her birth was very fast and when they handed her to me I couldn’t believe how tiny she was at 5lb 9oz.

I wanted to breastfeed as I had done with my son, Harry who was 22 months at this point. No matter how hard I tried, Isabelle would not latch on. The midwives on the ward put this down to her being so small and tired from the birth. I was told to persevere. The following night I had a breakdown in the small hours and made the heart wrenching decision to change to formula and a teat. I was exhausted and Isabelle was hungry, it was one of the hardest decisions I had to make and I really beat myself up emotionally over it, which was the most awful feeling. My main concern was that Isabelle would get enough nourishment to thrive.

Isabelle was constantly spitting up from her nose and only taking tiny amounts of formula. Her palate was checked twice by the midwives and again by the paediatrician who discharged us by using a finger to check for a cleft, we were assured she was fine. After our discharge I was quite poorly with suspected preeclampsia and was re-admitted, with the worry of this along with a hungry, upset newborn, I was at my wits end!

At 10 days old the first suggestion of something being wrong with Isabelle came from my midwife who was seeing me at home, she advised me to take her to my GP for a thorough examination, which I did the following day. My GP looked in her mouth using a tongue depressor and a torch, he then called another doctor in, they noted that she was missing her Uvula (dangly bit at the back of the mouth) I was told that this can happen and that it was nothing to worry about! I was confused and angry and could find little research online regarding this. The next day I saw my midwife again I explained how I was feeling, she rang my hospital and asked for an appointment immediately for us, they refused said it was not urgent and said the GP had to refer us! We didn’t see a paediatrician for another 6 weeks. During this time I did everything I could to help Isabelle get the nourishment she desperately needed, I put extra holes in her teats and eventually developed my own way of squeezing the teat to squirt the milk into her mouth. Isabelle gained weight slowly but at least she was growing. Those 6 weeks were some of the hardest of my life, looking back now I don’t know how we did it.

I knew very little about cleft palates but knew from my own research this was a definite possibility. The day of our appointment came and our paediatrician was the first person in almost 2 months to say the words cleft palate. I was devastated not knowing what this would mean for our daughter. Within 24 hours I had a phone call from our cleft nurse Caroline Stone, she came to see us and confirmed that Isabelle had a cleft of the soft palate. She was fantastic and it was such a relief to finally have someone tell us what was wrong and that it was not all in my imagination! I was shown how to feed her using the soft MAM bottles and it was unreal that I could finally feed my daughter. She immediately began taking much larger quantities of milk and sleeping for longer periods, she was so settled, the difference in her was remarkable. We were told that her cleft would need repairing and we were referred to the surgeon at Queens Medical Centre, Nottingham.

Isabelle had her surgery at 6 1/2 months old. It was a terrifying experience to go through, giving my tiny daughter to a room full of strangers and I sobbed as I did it. The recovery was hard at times, but Isabelle was amazing, continuing with her bottles throughout.

I am now happy to say Isabelle is now 10 months old and doing amazingly well. She is still small and I think always will be! Our journey so far has been a tough one and her entry into the world should not have been this hard, but we are incredibly grateful to the help we received from our Cleft Team and CLAPA.

I decided to tell Isabelle’s story to show other families that you are not alone and to encourage hospitals to check the palate using a tongue depressor and a torch and not just a finger. It could mean families not having to experience the horrible helpless feeling we did.”

Late diagnosis of cleft palate is unfortunately still very common. A recent report published by CRANE showed that 28% of babies are not diagnosed within 24 hours as they should be, and that 5% of babies are over a month old before they are diagnosed, like Isabelle here. If you suspect your baby may have a cleft palate, it is important to make sure they are examined using a tongue depressor and a torch, not just a finger sweep.

If you would like to talk to another parent about any issues you may be having related to your child’s cleft, get in touch with one of our trained Parent Contacts.