Jay and Lisa-Marie Bush took up the challenge of an unguided trek of the Nepalese Annapurna Circuit during October-November 2012 after Lisa-Marie’s cousin Lesley had a child with a cleft.

“Two chest infections, a sinus infection, and a bout of altitude sickness (forcing a backtrack down the mountain), and 12 days of walking with loaded packs saw us to Thorong La, the highest trekking pass in the world at 5,416m (17,769ft), and the highlight of Nepal’s Annapurna Circuit. Raising money for the UK’s Cleft Lip and Palate Association to help affected children and their families; it would be three weeks of trekking to cover the full 360 kilometres of mountain trails, followed by bus journey down the precipitous Kali Gandaki valley (which we were happy just to survive) to the official end at the town of Beni.”

Here we are at the top, 5400m Thorong La, with the t-shirt supplied by CLAPA – somehow we’d managed to keep it white! 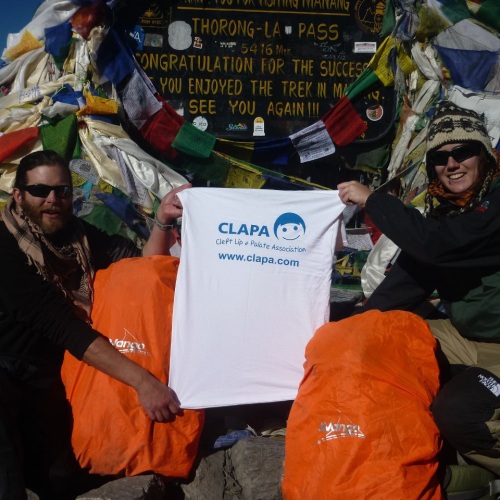 We first became aware of this charity when my cousin Lesley and her husband Rob found out they were expecting a baby who was going to be born with a cleft lip and palate.  CLAPA provided a lot of information to help everyone better understand what this would mean for the family, and we started to think of ways in which we could help.

This is what it has meant to Lesley and her family:

“We were told that our baby was going to be born with a cleft lip and possible cleft palate at our 20 week scan.  This was a total shock and we didn’t really understand what it meant for our baby.  We were immediately referred to a consultant who gave us literature about the condition and information about CLAPA.  It was then that the charity became so important in our lives, it reassured us that everything was going to be alright.  We were able to read through stories from other parents, medical information and photographs of other babies before and after their surgeries.  With the growing knowledge came increased comfort.

When Max was born, we went through CLAPA to order the specialist bottles and teats we required in order to feed him.  We also joined the CLAPA Facebook site which has proven invaluable in receiving and giving support from other families affected by clefts.  The support is the most important aspect of what CLAPA can offer, knowing that we are not alone and that others have faced the same challenges and won, is inspiring.”

The company Jay works for (Switch Systems Ltd) not only provided some extended leave to make the trek possible, but also sponsored a massive £500 to the cause, so a big thank you to them.