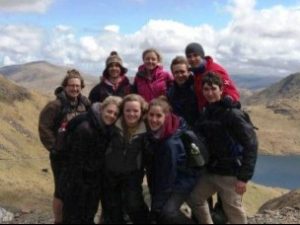 Melissa Chandler was born with a cleft palate, and to show her appreciation for all the support she and her family have received over the years, she’s decided to test the limits of her endurance and take on the 3 Peaks Challenge!

Along with a team of eager colleagues, Melissa will be attempting to scale Britain’s three tallest mountains in just 24 hours. After tackling all 4,400 feet of Ben Nevis in Scotland, the trekkers will head to Scafell Pike in the Lake District before heading down to Snowdon in Wales.

“Training has been hard,” Melissa says, “including a practice trip to Snowdon, an adventure made even more challenging by my fear of heights! I was born with a cleft palate myself, and it is through the help and attention of charities like CLAPA that I became the Melissa everyone knows today. The encouragement so far has been overwhelming, and I am inspired by the magic we are making for CLAPA and the people it supports. Wish me luck!”

You can support Melissa and her colleagues by visiting her Just Giving page, or by texting MELI55 followed by the amount of your donation (e.g. MELI55 £10) to 70070.

Before this challenge, Melissa helped other people like her over Christmas by donating some of her wages from her job at Disneyland Paris to CLAPA. “It was so much fun working at Disney, and so worth the tiring hours when you are making magic for families at Christmas.”

A huge thanks to Melissa for all of her hard work, and best of luck for her challenge!