Sabrina decided to get in touch with CLAPA in the hope that parents of children born with a cleft and young people growing up affected by cleft might find it a source of comfort to hear from someone with her experiences.

In this short interview, she explains how she has avoided letting being born with a cleft affect her confidence, and offers advice to young people who are working on building their own self-esteem as they grow up. 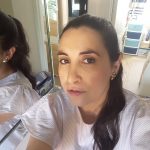 Sabrina can’t remember the details of her operations. There were 4 or 5 of them, she thinks, and mostly before she reached school age. She looked for the written details with her mum once but they must have been put aside and they’ve since gone astray.

She’s decided to tell her story now as she hopes what she has to say will help reassure parents and children who are affected by cleft.

“It hasn’t really affected the way I live my life too much,” she explains. “I thought it might be comforting for them to hear that it doesn’t have to be a big thing.”

“She doesn’t discuss it and I think she felt guilty when I was born with one,” Sabrina reflects. “We were born with different types. Her cleft was on one side, mine was on both.”

Sabrina’s grandmother was older than most children are now when she had her operations, which meant a lot of her treatment was during her school years. Growing up in Italy as part of a different generation and without access to the resources of modern NHS cleft teams, like a cleft team psychologist, Sabrina thinks her grandmother’s cleft had more of a psychological impact on her well-being than Sabrina experienced herself.

“I can remember my mum telling me that my gran didn’t like her taking photos of me before my surgery,” Sabrina recalls. “She couldn’t understand why my mum would want those pictures.”

Sabrina has two young sons herself. Laughing, she admits she is too busy to worry about her scar much nowadays, with all her attention focused on them.

“My cleft didn’t really bother me until my teens,” she remembers. “Having scars had some impact on me, but I was lucky that I only got few comments about it.”

She thinks that, had she experienced bullying because of her cleft, as her gran did, she might feel differently.

In her late teens Sabrina’s cleft started to affect her life a little bit more. Nerves around dating were intensified and, as someone who wore make up every day at that age, it was a strange feeling to think of someone seeing her without make up and wonder if her scars might bother a potential date.

She met her husband when she was twenty, and it was far easier to overcome her worries than she had prepared for in her mind.

“In your own mind you create something bigger than other people see.”

If someone offered to take my scars away I’d say no. they’re a part of me now.

“It would have been discussed pretty quickly,” she recalls. “I would have just said something like ‘I’ve got scars and they’re just a part of me’ – it never bothered him.”

Later, when the couple began to think about children of their own, Sabrina remembers having concerns in the back of her mind.

“It wasn’t an issue for my husband, he’s very laid back, but it was definitely a thought I had.”

As it turned out, neither of the couple’s little boys were born with a cleft. They ask there mum about ‘those marks’ sometimes but it’s a passing interest, and not something that comes up often.

Treatment as an adult

As an adult, Sabrina hasn’t gone on to have further surgery. The last operations that she had were in her late teens, when she had treatment to help align her lips and then at 17, when she underwent rhinoplasty to alter the shape of her nose.

“I felt fine about it,” she remembers. “When you’ve had quite a few operations before, it doesn’t bother you as much, although recovery is pretty tough. You look like you’ve been punched!”

After a few days of dealing with steady and constant bleeding from her nose, resulting in a couple of uncomfortable nights of sleep with her head propped upright, she was mostly satisfied with the results.

In your own mind you create something bigger than other people see.

Beyond what you see

Sabrina owns some specialised make up designed to cover scars, but she doesn’t wear it most days.

“I do think it’s quite sad, how consumed by looks we can get, and it’s especially hard for teenagers,” she considers. “As you grow up you realise, you just need a few good friends. That’s what matters.”

She does think it would be helpful to have more positive representation of cleft lip and palate in the media. As an adult, she is able to roll her eyes at any negative publicity that surrounds visible differences in films and television, but she thinks it would be upsetting for young people who are trying to build their confidence.

She was excited when she came across a baby with a cleft, modelling baby grows on NotOnTheHighStreet.com, shortly before our interview. Representation like this is key to helping people accept themselves in her opinion.

“It helps to see it because you can think ‘OK, I’m different, but not that different.”

“It was harder for my gran,” she continues. “When she was at school there was less awareness and I think there was some bullying, which was hard for her. I haven’t ever been really unhappy with who I am but I think there’s a lot of pressure on kids now to look a certain way. If someone offered to take my scars away I’d say no. they’re a part of me now.”

To young people born with a cleft who are working on their confidence, she would offer the following advice:

“This is the way you’ve been born and there is nothing you can do about it. So, instead of fighting against it, embrace it! Try to be happy with how you look. It’s just a part of you. Sometimes it’s nice to be different.”

Sometimes it’s nice to be different. 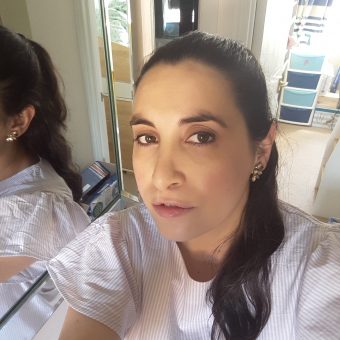 A huge thank you to Sabrina for sharing her lovely interview with CLAPA.

Inspired by Sabrina’s story? You can share yours here: