“What’s the difference between you and me? A scar, and maybe some bad memories. But that’s it.”

Teenager with a cleft lip

Teenage years can be tough, there’s no doubt about it. You’re trying to find your feet and decide who you want to be, how you’ll fit in with the world, but it’s hard when you feel under more scrutiny than ever before. Every difference is magnified, no matter how small.

If you were born with a cleft lip and palate, those differences might feel like all others see.

“Having a cleft doesn’t bother me, but people think we’re completely different just because we look different. I wish I could be treated like everyone else.”

14-year-old with a cleft lip

At CLAPA we think it’s vital for everyone to get the chance to make friends who understand what they’re going through. People they can talk to about having a cleft without having to explain every little detail, or worrying they’ll be judged. People who have been through it all themselves.

That’s why we put on so many events for under 18s, including our very popular Residential Weekends. These events can make such a huge difference to the self-confidence and outlook of the young people who attend them. Last year, 89% of under 18s who came along to a CLAPA event told us they felt more positive about their cleft afterwards, and more confident about themselves and what they could achieve.

Martha went on a Residential Weekend in Spring 2017, and explains how it helped her to change the way the thought about her cleft:

“I was having a bit of a hard time at school, feeling like everyone was looking at me and wondering if my friends really liked me. My confidence was very low. I had been on previous CLAPA weekends and had found that sharing experiences and having a laugh with other kids with clefts had really boosted me. I talked to my mum and dad about going on the weekend and they were encouraging.

“Cudham was a beautiful place in the forest and the lady who ran the centre was really welcoming and made delicious food. There were so many brilliant activities, exploring the woods, tag rugby, den building and making campfires and a disco. We also spent lots of time chatting in our dorms.

“It was really nice that some of the adult helpers were just a bit older than me in their 20’s. They seemed really confident and I felt inspired by them. Every time I leave to go home after a CLAPA trip I burst into tears because I’ve had such an amazing time. When I go back to school I know I feel a little bit proud to have a cleft, I feel much more confident. I wish there were more opportunities to meet other teens with clefts.”

Roannah helped out at the CLAPA office in 2014 in the lead-up to cleft lip and palate Awareness Week. As part of this, she decided to write her story to share with others like her and help raise awareness of cleft and the importance of having a community of people around you.

“Hello, my name is Roannah, I am 20 years old and was born with an incomplete bilateral cleft lip. I’ve had two operations, my first when I was 4 months old and my second when I was 10.

My parents always brought me up making me aware of the fact I had a cleft lip and teaching me about it. During primary school I educated people about what I had and no one ever treated me different.

Whilst I was recovering after my second operation I was adamant not to miss a Victorian day at school and I turned up with my hand over my mouth covering the swelling and bruises. Although I was self conscious at first, when people asked to see I would show them. Everyone was just intrigued and made me feel at ease. I always remember how proud my parents, teachers and consultants were of me through this period as I used to put on a brave face and be independent cleaning and massaging my own wounds.

It was only in secondary school that people were a little less accepting of it. They were uneducated on the matter therefore people would tease me because of this. These people were only the minority so I often brushed it off with the help of loyal friends and a supportive family. When I was younger I would get upset that I couldn’t  wear lipstick like other girls as I felt like it made my lip stand out or look like I’d applied it badly. In hindsight no one would’ve questioned it, they don’t now.

College and university years have been a lot easier; when I meet new people now they don’t notice I have anything wrong unless I tell them. I feel like I’ve been lucky due to the fact I ‘only’ had an incomplete bilateral cleft lip. I’ve had a lot of complications with my teeth, we’ve always believed the two were linked as the main problem was with the teeth on the same line as my cleft – two teeth were joined together and at least one second tooth was missing.

During my second operation I had a few teeth removed and my tongue cut due to being tongue tied, this may have made my recovery process slower but it was never a problem. I remember only being able to eat soft foods for quite a while and having a sore throat, however, I feel that was a result of all the procedures I had done, not just my lip. I feel quite comfortable with the look of my lip at the moment. I was recently offered lip fillers to even out the shape of them but after a temporary trial I decided against this.

Having a cleft lip hasn’t greatly affected me growing up, it has never held me back from doing things. I’ve always been as able as any other person just lacked a little self confidence. However, the result of having a cleft lip has allowed me to be very accepting of others no matter what, it also makes me appreciate who I am knowing that there are people out there not as fortunate.

My great aunty also had a cleft lip so my dad was aware of the condition unlike my mum. There may be a genetic link as I have relatives with branchio-oto-renal syndrome but this has never been confirmed, neither of my parents took genetic tests so it is unsure what caused it.

Whilst I was younger CLAPA helped support my parents, the main help they had was a visit the day after I was born, from a mum and her young daughter who had been born with a cleft lip which had been successfully repaired. When I was younger they also used the online forum to hear how other young people coped and also to give support to other new parents. My mother needed support with bottle feeding, there was help with this after my first operation as I couldn’t be breast fed for a while.

I think having this community for not only people with cleft lips but those affected as well is one of the most important factors. I found it useful growing up talking to other cleft lip and palate patients and hearing their experiences, it definitely eases your mind. I’ve always wanted to get involved and raise awareness for the charity. Cleft lips are something I feel not many people are aware of or maybe don’t quite understand and it is great that CLAPA raises public awareness and offers help, support and advice to those affected.” 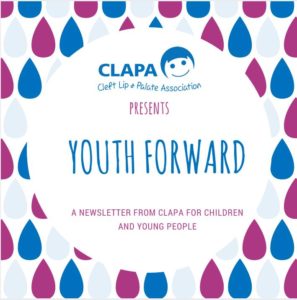 CLAPA Youth Forward is a community for under 18s with a cleft. Right now, there’s a quarterly newsletter, but we’re hoping to expand this in the future. The content is created by young people for young people, and revolves around personal stories, practical tips, and exciting upcoming events.

Please note – Youth Forward is for under 18s with their own email address only. If you’re a parent, please don’t sign up using your email address! If you sign up to our main community, you’ll still hear all about upcoming events aimed at your child’s age range and area.

Are you a teenager with a story to tell? Get in touch!

We’d love to hear about your experiences, and any advice you have for others your age who might be feeling the same way.