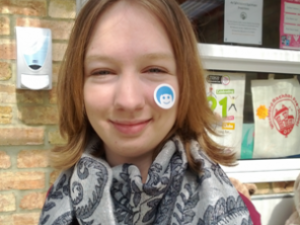 Since the age of 9, Jaimee Tuck (15) has gone above and beyond to raise money and awareness for CLAPA. Jaimee’s younger sister, Molly (7) was born with a cleft palate. Molly’s cleft was diagnosed two days after birth, and the family were soon put in contact with CLAPA. “I had never heard of CLAPA before Molly was born” says Jaimee “which is why I’ve organised events at my primary school and secondary school, to raise money and awareness.”

Jaimee has raised nearly £1000 for CLAPA through various fundraising events. When Jaimee was at primary school, she held a non-uniform day. Jaimee arranged a further non-uniform day at her secondary school and asked a representative from CLAPA to talk at the school assembly. Jaimee has also organised a cake sale. “Although it was a lot of fun, it was hard work, as I spent all weekend baking cakes- I made and decorated more than 200” says Jaimee. Not only has Jaimee been proactive in planning her own fundraising events, she has also helped out at the CLAPA Cambridge parties and set up a young people’s group- a chance for people born with a cleft and their siblings to socialise and meet new friends.

In addition to raising money for CLAPA, Jaimee has raised a considerable amount of awareness for the charity. Through the events Jaimee has organised, fellow students (affected by a cleft) have learnt more about CLAPA and gone on to participate in CLAPA events. A local business man chose CLAPA as his sponsored charity at a charity golf day thanks to Jaimee’s awareness raising.

“I got involved with supporting CLAPA as a way of saying thank you for the help they gave to my family and it feels good to know that my help will go towards helping others who are in the situation we were in.”

Jaimee’s sister Molly was born in 2006, and has undergone 6 operations. She had a repair on her palate at 11 months then again at 22 months. Molly has ongoing speech therapy and hearing problems. Since she has some difficulty learning to speak, Jaimee has learnt Makaton so that her and her sister can communicate.

Jaimee’s support for her sister and CLAPA have not gone un-noticed as she was recently nominated for a Ferrier Pearce Young People of the Year Award (or YOPEY) by her friend Eleanor Upton-Heath. “Jaimee always put her sister first, and was always there for her” says Eleanor. “Jaimee is a really special teenager and she still manages to be kind, considerate and do brilliantly at school. I would just like her to have a reward for her long and passionate devotion to her little sister, so that she can recognise how special she is to everyone around her.”

CLAPA would like to say a big thank you to Jaimee for all the hard work she has put into raising awareness and money for CLAPA and congratulate her on being a role model to other teenagers.

If you have been inspired by Jaimee to organise events for CLAPA please follow this link: