Monday was our usual day at Children’s Surgical Centre. After the morning meeting, we were finally able to give Samnang the updated Khmer Assessment of Speech Sounds, with the extra pictures he had requested. We also had a discussion about how great it is that the speech therapy tab is now up and running on the online database, and our plans to help him secure consistent funding from the hospital for feeding equipment. During the discussion we chatted about the training program we will be leaving with him, so that he can continue to teach Vin until next year’s team arrives. In June, there will be dentistry students from Scotland coming to CSC, as they have a particular interest in cleft lip and palate. As a project for them while they are there, we were asked to give them something of ours to follow-up on. This works out very nicely and means that we can get them to check up on Vin’s training, note-keeping, and the data collection of how many feeding bottles and teats are given out. This information will then be written into a report and handed over to next year’s City-Cambodia cleft team. Samnang told us that he was very happy with everything we have done in the department and feels that we have been working very hard. It’s lovely that he is so grateful.

Before lunch we attempted to do some teaching with Vin about the importance of the various sections on the case history form, but were interrupted when a mum came in with a young baby with cleft lip and palate for feeding advice from Vin. As soon as that session finished we were asked by the surgeons to see two young adults, a brother and sister both with repaired cleft lip and palate. The girl was booked in for surgery in the afternoon to repair a fistula, but they wanted her speech to be assessed as an outcome measure so that improvement could be checked after surgery. The boy had suspected velopharyngeal dysfunction and they wanted the speech department to assess him too, and to advise whether a surgical or therapeutic route was more appropriate. Alongside Vin, we decided that his speech errors could be improved by speech therapy rather than surgery.

After lunch there were two more clients to be seen. One of these was an appointment for feeding advice for a young baby with cleft lip and palate. The second was for a five year old girl, who we had seen for assessment and one therapy session a month prior. The girl and her mother had been practicing differentiating between oral and nasal airflow and auditory discrimination between /t/ and /k/ at home.  The session was enjoyable as the girl is super cheerful and laughs a lot! She is the only child we have been able to see for more than just one therapy session, and it was useful to be able to see her for follow-up, so that we could demonstrate a continuing therapy pathway to Vin. We continued the girl’s therapy by working on oral airflow and beginning to help her produce the sound /t/. As she is incredibly fun and easy to work with and it made for a really good on the job training for Vin. We taught Vin by describing the activities and sometimes modelling with the child and then getting Vin to have a go.

On Tuesday, we spent part of the morning in the office, making edits to the KASS record sheet and creating the document detailing the work we want the dentistry students to complete. After this, we went on a CSC computer and organised previous training that had been done with Samnang into various folders for him to carry out with Vin over the next year. We wanted to ensure that we have clear guidelines so that the training will be carried out. We got Vin to role play carrying out a KASS assessment with us, as she had not practiced doing the written recording before. We also taught her about how to determine whether a child is hypernasal or hyponasal. A client came in and Vin was able to carry out a full case history and speech assessment with the child and her mother. We were very proud! 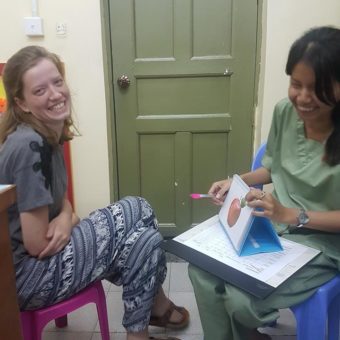 Another child we saw was a little boy with autism who came in with his mother. He was a non-cleft patient. These children are not typically allowed to be seen at CSC, but Samnang had seen him previously and told the mother to bring him back when we were here so that we could give advice. The mother was concerned about the boy’s behaviour and the fact that he got upset when he wasn’t allowed to do something or when he had to go to a new place. We spoke about visual timetables and as there was one pre-made in the room, were able to demonstrate its use. After she left, Vin told us that the mum had been very upset in the previous session but was really happy with what we had suggested. It’s difficult when we only get to see people once and not to be able to do a follow-up but this mother seemed like she would carry out what we had suggested and we were glad that she was happy with our help.

Over the course of the two days, we were able to show Samnang and Vin how to upload the case history, speech assessment, and therapy record sheets to the database. Consistent note-keeping is something that people have been trying to implement for years with little success. The system we have implemented this year involves recording the notes as the session is happening, then scanning these in to the database. This week, Vin was completing all sections of the forms and, with prompting from us, bringing them to be uploaded after each session. This was one of our main aims for our time here, so it is satisfying to see it happening just before we leave. Samnang is so happy with it and it has been built into Vin’s training from the beginning. We are really hoping that it will continue.

On Wednesday we were at National Paediatric Hospital. Helena had the chance to observe Raphael’s occupational and physical therapy department. This was a great opportunity to do some multi-disciplinary working and share our knowledge between different professionals. In Dr Allin’s speech clinic, Caitlin observed some beautiful interactions between Dr Allin and the children. Dr Allin is now very independent at giving speech therapy to children with cleft lip and palate. In the Wednesday speech clinic, it is not uncommon for children with other communication difficulties to also turn up. This week there were three children with autism who attended the clinic. Dr Allin had expressed that she wanted to expand her knowledge in this field and over the past three months we have been modelling strategies that she can suggest to the families to help create positive interactions with their child. Caitlin did some further modelling in the speech clinic this week and by the last session Dr Allin was able to carry out the session independently. This was really encouraging to see and reassuring to watch her implement all the strategies and advice that we have modelled during our time at NPH.

At the end of the clinic there were three new-born babies whose families needed some feeding advice. Dr Allin is very good at feeding advice and it was lovely to see her giving each family one bottle and teat that CLAPA donated to them. The bottles are designed to be gently squeezed by the mother to enable the milk to flow even if the baby cannot get suction. The teats are to aid a baby to get milk from out by themselves which in turn allows them to learn to self-regulate. 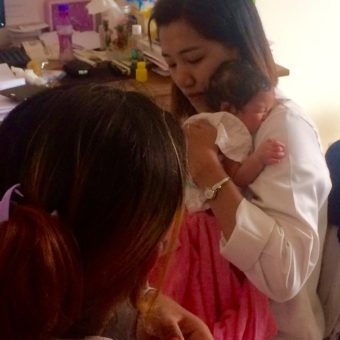 On top of what was already a very good morning, Dr Allin informed us that she got 100% in the final exam of the Paññāsāstra University course. This is a fantastic achievement and we were both really proud. We also found out that all of the thirteen students passed the exam and we began to get excited about seeing them all graduate on the coming Friday.

On Wednesday afternoon, we went to Khmer Soviet Friendship Hospital to see Socheata, the administrator who was our main point of contact during the missions. She wanted to say thank you for all the work we have done on the two Smile missions and to show their appreciation they gave us both ‘Smile mission’ caps with our names on the back. It was lovely to have someone appreciate the work we have done, and to have the chance to say goodbye to Socheata and the KSFH team before we leave.

After our meeting we had a few hours of admin time which we used to create the training curriculum for Samnang to use with Vin over the next 9 months.

On Thursday afternoon, we went to Cambodia Cure Medical Centre with One-2-One staff. Here we helped Annabelle deliver speech therapy to a 7 year old girl.  It was fantastic to see Annabelle’s continued enthusiasm about speech therapy and watch her confidence grow in her own clinical skills. 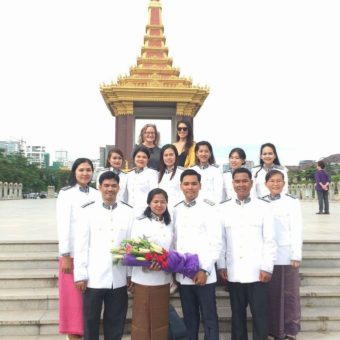