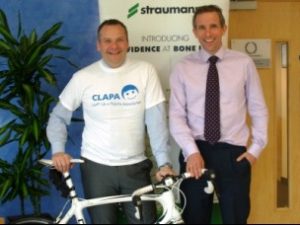 Straumann UK like a challenge, so to prove it they have committed themselves to raising a significant amount of money for charity by organising a bike ride from their headquarters in Basel, Switzerland to their UK offices in Crawley, West Sussex – a mere 600 miles in six days! Steve Booth, Managing Director of Straumann UK (pictured on left with Head of Finance Dave Upton), will head up the 30-strong team, which will include a handful of Straumann staff, and a group of very loyal customers.

The ride will commence at the Straumann headquarters in Basel on Thursday 19th September 2013 and finish at the Head Office of Straumann UK on Tuesday 24th September, hopefully with all the riders still intact! The route will be challenging as part of it covers at least one of the stages of the Tour de France, however this will be an exciting once in a lifetime opportunity for the riders involved.

The goal is for each person taking part to raise a minimum of £1000 in sponsorship money and Straumann are ultimately aiming to raise over £50,000 for the chosen charities, Bridge2Aid and the Cleft Lip and Palate Association (CLAPA).

For more information or to give a donation visit uk.virginmoneygiving.com/team/Straumann

From all of us at CLAPA, we wish the best of luck to all participants in both their lengthy cycle ride and their fundraising!