10-year-old Aleisha has been chosen to represent CLAPA at this year’s CarFest, the family festival created by radio presenter Chris Evans.

Aleisha is one of five children representing charities like CLAPA who receive funding from BBC Children in Need. They’ll be telling their stories and raising awareness about their charities to make sure everyone attending CarFest this year understands the huge impact that the fundraising at this festival can have on children around the UK. 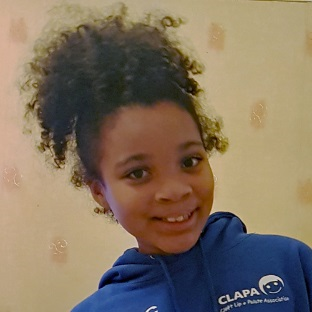 Aleisha was born with a cleft lip and palate, and her mum Stacey first heard about CLAPA when we provided her with special bottles and teats to help Aleisha feed as a baby. When she was around 6, she started to get more involved through local events and activities funded by BBC Children in Need.

“Aleisha has been involved in loads of CLAPA events,” says Claire, “from adventure days and residential weekends through to wild camping in the forest! She began as a less confident and nervous eight year old who now has loads of self confidence and helps to look after other young people coming to their first CLAPA events. She recently joined CLAPA’s youth council (CYPC) and is passionate about helping other young people on their cleft journey.”

Many of these activities have only been possible thanks to funding from BBC Children in Need. The money that CarFest raises for this vital fund could pay for around sixty three-year small grants for projects like these across the UK!

When asked about the chance to represent CLAPA on such a big stage, Aleisha says, “I am dearly grateful for CLAPA and BBC Children in Need for all they have done for me and my mom since I was born. Without their generosity life would have been a lot more difficult. They have helped me become the person I am today. I am also grateful for the magnificent opportunity they have given me by choosing me to be the face for CarFest and #DoMoreGood. So together we can show people how their donations help people like me. I am so excited for CarFest – I cannot wait to see the cool cars!”

We’re extremely proud of Aleisha, and we know she’ll do a fantastic job!

Update: Catch Aleisha on Midlands Today on 25th August in the early evening to talk about her work with CLAPA and CarFest!

CarFest takes place in two locations across two weekends in July and August respectively, and has been described by the thousands of die-hard fans as ‘the biggest ever village fete’ with a mission to bring the true spirit of family to life. The weekend is packed to the brim with activities for every member of the family, underpinned by great music, celebrity chefs and as the name suggests, plenty of cars! The event was launched in 2012 by Chris Evans to raise funds for BBC Children in Need and will raise money for six UK children’s charities this year.

Over the past six years, CarFest has raised over £13.5 million for BBC Children in Need. This year BBC Children in Need remains in place as CarFest’s principal charity partner and will receive 50% of the total funds raised, with the other 50% going to other worthy causes.

Chris Evans said of this year’s campaign: “CarFest was created with the primary aim of raising funds for UK children’s charities and this year I wanted to extend our relationship further by also helping some other great charities. Each of these organisations does such great work, and as you can tell from Aleisha, Sophie, Henry, Oscar and Lauren’s own personal experiences, they directly change young people’s lives, through not just research and treatment, but critically, by providing life-changing support, advice, confidence building activities to give them all the strength and belief to carry on fighting.  CarFest allows members of the public to really #DoMoreGood – simply by joining us for a weekend filled with fun, laughter, great music and a lot of cars!”

Full details of the line-up are available on www.carfest.org