If you follow us on Twitter, you might remember us in the CLAPA office getting really excited following the story of 10 students and their teachers from Queen’s School Girls Chester, who cycled 120 miles, to raise nearly £2000 (and the figure’s still rising!) for CLAPA. The girls’ achievement is even more impressive considering they set off just two weeks after completing their GCSE exams!

This #FundraisingFriday we want to share Zoe’s fundraising journal with you. Zoe was one of the ten young ladies who took part, and was born with a cleft palate. Here is her own account of the once in a lifetime cycling event.

From 5th to 7th July, myself and 9 fellow students, from the Queen’s School Chester, cycled from Penrhos Beach, Holyhead to our school in Chester. In total we cycled 120 miles and climbed 2,200 feet in the three days. Our total raised for CLAPA so far, is nearing £2,000! 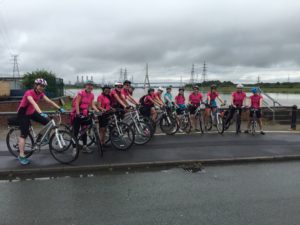 We chose to support CLAPA because I was born with a Cleft Palate and this charity aided my parents by providing them with special feeding bottles and teaching them about the issues they would face and what it meant. I saw this as an opportunity to give something back to CLAPA.

Day one began with high spirits and excitement. This first section of the ride was challenging, with numerous “inclines” (which felt more like mountains), fortunately this also gave us numerous downhill slopes. We arrived at the University of Bangor and went for dinner at a local restaurant / pub which served us some well-earned dinner and gave us back the calories we had lost during our 70 km ride. 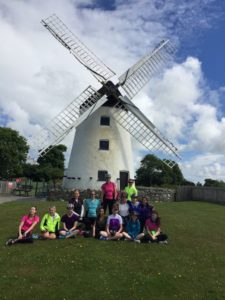 Day two marked the morning that we realised the extent of our sunburn!  I had a rather unfortunate sunglasses burn line, many had ‘man tans’, sock lines and our cycling shorts had given us a rather nice band of red on our thighs. We cycled further than we had initially planned for that day so that we did not have to ride as far on the final day – we wanted to make sure we arrived back at school for the right time. This was much to many of my fellow cyclists dismay, as we just wanted to eat and go to bed!  But we cycled on knowing we would be pleased with our shortened cycle the next day.  After dinner we were greeted by a classmate who met us at the hostel with cake!  This brightened our spirits even further, as we had some delicious chocolate cake for lunch the next day. 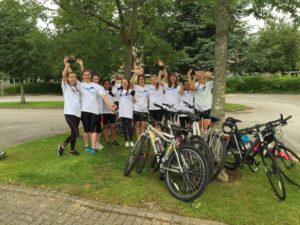 Day three, the final day, was met with hope, as we could finally see the light at the end of the tunnel.  We were sore and a little less sunburnt, as there had been little sun the day before. We headed off in the minibus to where we had finished the day before and we were definitely pleased our ride was going to be shorter. The rain was pouring down, which gave our sunburn a little relief, but the sun was ‘still shining in our hearts’.  With a quick lunch stop, to ensure we were running on time, we refueled and went on our way.  With 20 km to go we realised we were quite ahead of schedule and by quite, I mean about an hour.  We knew we were very nearly home when we started cycling by the River Dee, much to my dismay as during a training ride I had fallen into the river and badly cut my leg; so, as you can imagine, I was kept well away from the edge. We stopped at Chester racecourse and sat at one of the restaurants with drinks, waiting for a suitable time to arrive at school. To our delight we were greeted with music and cheers, as “Qfest” (the Queens School Festival) was in full swing. 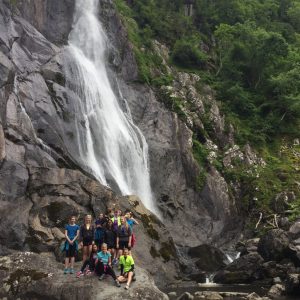 I believe I speak for everyone when I say I will treasure the memories I made on this ride forever, but maybe not the sunburn or muscle ache.

On behalf of all the CLAPA team, we’d like to say a massive thank you to all the students and their teachers who took part in the challenge in support of CLAPA. We think you’re all amazing and we hope you made memories to last a lifetime!

If you want to support Zoe and her team you can find their Just Giving page here: https://www.justgiving.com/teams/HQ2016