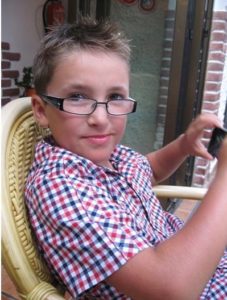 Hello I am William Helstrip from the CLAPA Young People’s Council.

It took a lot of effort and devotion to make it happen but in the end it was all worth it! Normally at my school we would have a cake stall every so often. So I went and a asked my head teacher and I told her about CLAPA and asked if I could do a cake stall and she said that was fine. She also suggested that I do a non-uniform day and everyone had to bring in a pound to participate in the non-uniform day. I had to ask all my friends if they would help me with my cake stall but mostly my friends and family came to me and asked if they could get involved and help bake the cakes. They also asked if they could help sell the cakes at school.

I also made a Just Giving page so others could donate online. Here is my just giving page if you would like to take a look: www.justgiving.com/William-Helstrip. I raised over £200.00 in donations before I even did the event. My mum helped loads with making the cakes and organizing everything. I had a letter sent home to all the parents telling every body about the non-uniform day and cake stall. My mum let every one know on Facebook that I was doing the event and I got a lot of donations. Also my dad put on his twitter page that I was doing the fundraising and lots of his fans donated (my dad is a DJ). My mum got in touch with one of the big local newspapers, the Yorkshire Evening Press, and on the day of the cake stall they came to our school and took photos and interviewed me! I felt very proud of what I achieved. The very next day I got a phone call from my Grandma saying that I was on the front page of the newspaper! I also got asked to write an article in our Village Cross magazine that gets handed out to everyone in our village.

Why don’t you do some fundraising? It does take a lot of effort but in the end it is all worth it. You could just do a sponsored bicycle ride or let people throw sponges at you for 10p, or do a cake stall like I did. Every penny counts!

Well done, William! If you have a great idea for a fundraiser and need a little help to make it happen, get in touchwith CLAPA and we’ll give you a hand.