To celebrate Volunteers’ Week and the start of CLAPA’s 40th Birthday month, we spoke to Oliver about his experiences of growing up with a cleft lip and palate and found out what he most enjoys about volunteering for CLAPA as part of our board of trustees. 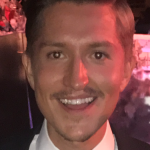 Growing up as one of eight, Oliver was never made to feel any different than his siblings.

He first became aware of ways his life varied from theirs when he was 9 and heading to hospital for his bone graft surgery.

“I spent my birthday in hospital that year,” he remembers.

With such a big family for his parents to look after, it was Oliver’s gran who took him to most of his appointments and stayed with him while he recovered.

“We’re still close today,” he explains fondly. “And now that she is getting older and having more hospital appointments herself, it feels quite like a role reversal.”

Before Oliver was born, his parents didn’t know he was going to have a cleft – it came as a complete surprise. He remembers his mum disclosing when he was older that she cried in the delivery room when the nurses whisked him away without explanation. It would be four more years before his parents had their next child, preoccupied with Oliver’s care and thoughts of a second child being born with a cleft.

When he was eleven years old, Oliver moved under the care of the GOSH team and over the next few years began to be more independent in his cleft care choices.

“I think I quite enjoyed having control of my own decisions,” he admits.

“…you have to look inside and help yourself recognise who you are and that whoever and whatever that is, that’s OK.”

Most of Oliver’s surgery took place in his teens and as an adult. He’s had 32 operations in total, with surgery on his lip and palate and later on his ears as a child. His operations focused on his nose and jaw as an adult.

“At 28, I’m hopefully done with surgery now,” he explains. “I’d only really have others if it was medically necessary, I think.”

A few people still notice the scar on his lip and ask questions which he feels comfortable enough to answer.

“Naturally, there was some teasing in high school, some name-calling. Luckily it never bothered me enough to let it influence the treatments I was having or to make me want to consider further surgeries.”

And an adult Oliver finds being born with a cleft easier to talk about openly.

“As I’m a CLAPA Trustee the subject still comes up a lot in conversation. People ask me how I got involved and what my interest in CLAPA is. My friends have seen me go for various surgeries and treatments over the past ten years, so they’re aware of it too.”

“It’s nice to see people care about making the charity the best it can be.”

Currently the youngest trustee on the board, Oliver decided to apply for the position after seeing a CLAPA poster in a clinic waiting room at Great Ormond Street Hospital (GOSH).

“I hadn’t thought about CLAPA in years,” Oliver admits. “I used to go to the Christmas parties when I was younger. They were fun parties and I had really nice memories of them, which came back when I saw the logo.”

With this appointment being his final visit to the NHS Cleft Team and with studying for his master’s degree coming to an end, Oliver decided it would be a good time to get involved.

“I thought at first about doing some fundraising,” he remembers. “I visited the website when I got home from the appointment GOSH and familiarised myself with the work the charity was doing. That’s when I found the advert for a new trustee.”

Oliver applied, and was offered the role after an interview. He felt confident his experiences and professional skills would be useful, though for the first few meetings Oliver spent most of his time listening. As time went on he realised that, though he was early in his career, he had helpful contributions to make.

“Everyone on the board has different skillsets,” Oliver explains. “It’s nice to see that even when CLAPA struggles, as it has with financial pressures recently which have brought a lot more work and have meant my role as a trustee has taken a big role in my life, you can see improvement being made and know you’ve been part of that.”

All CLAPA’s trustees have a connection to cleft, be it professional or personal. Oliver is the only one of the current board members to have been born with a cleft himself.

“It’s great as someone who has a cleft to see the passion about CLAPA and cleft care from the rest of the board,” Oliver explains. “It’s nice to see people care about making the charity the best it can be.”

Contemplating what he likes most about volunteering for CLAPA as a trustee, Oliver admits that part of the appeal is that the work often presents a challenge.

“It’s a very tough climate for charities at the moment. I’d be personally very sad to see services limited or lost, especially having experienced the positives myself. Something as simple as going to a Christmas party as a child where everyone is the same as you can do so much for self- esteem and self-worth. The challenge of protecting things like this make the role worthwhile”

On the subject of raising young people’s self esteem, Oliver thinks social media quite often adds pressure to people’s childhood, and can create a more intense focus on looks. His advice to young people with a cleft is to look ahead.

“It can be hard. I have some memories of name-calling, and I’m lucky that it didn’t have more impact. Surgery did affect my studies and I often had to ask for extensions to work around treatment. I’m not sure there’s enough preparation for how long-term care is for cleft.”

As time goes on, he’d like there to be more focus and resources available to make young people aware of treatment-related experiences, like infection, so that they’re not frightened if this happens to them during treatment. He also thinks it’s important to help manage young people’s expectations about what outcomes various surgeries might have.

“At the end of the day there are a million ways to change or improve how you look but you have to look inside to help yourself recognise who you are and that whoever and whatever that is, that’s OK.”

Thank you so much to Oliver for sharing his story.

Do you have a volunteering story to share? What are your memories of 40 years of CLAPA?

We’d love to hear from you: