Carol was born in 1948 with a cleft palate. In this short interview with CLAPA she shares how her confidence has grown over the years, and how she has moved from being nervous about her speech to performing in front of crowds. 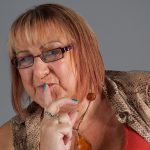 On a childhood trip to the seaside with her aunty and grandmother, Carol entered a competition. In front of the small crowd, she and the other children on stage were asked to drink a fizzy Tizer pop as quickly as they could. The one who finished their pop first would be the winner.

Though that day was over 60 years ago now, Carol still vividly remembers fleeing from the stage, embarrassed to find the fizzy pop running from her nose.

She thinks this might be the first time she had found herself more aware of her cleft, and after she began to take more note of the amount of hospital visits she had to make compared to her friends. Sheffield Fullwood Hospital was over an hour’s journey away by train and bus and the travelling and the visits still have a clear place in her memory.

Born in 1948 with a cleft palate, Carol arrived into the very early days of the NHS, in the first few weeks of its existence in fact. She was 2 years old when she had her palate repair.

“Children can be cruel,” she reflects, discussing her early childhood. “There was some teasing at school about the way I spoke but my parents were brilliant, especially as back in the early ‘50s there was so much less support for them than there is for parents now.”

She remembers her junior school, now recognised as year groups 7 to 11, as the hardest period in her education. She struggled significantly with her speech during this time, and even developed a stammer for a while, a fact that didn’t go unnoticed by her peers. As she moved up into Secondary Modern she remembers things becoming easier as her and her peers matured and learned.

“It was hard,” she remembers. “I think there were times in my childhood that felt quite traumatic, but I do think it’s made me a more confident person now.”

“Going to university, writing, performing – it’s helped me realise cleft is just something that’s in the background.”

Now Carol has no fear of speaking out.

She is a spoken word performer and poet, a scene she entered into after attending university in her 50s. She’s even written and performed her one-woman-show at Edinburgh Fringe festival a few years ago and has performed at all kinds of other events and festivals across the UK.

She considers confidence to be something that comes over time, and thinks that learning more about cleft helped as she has grown older.

“When I got divorced, nearly 17 years ago now, I reclaimed my life,” Carol explains. “Going to university, writing, performing – it’s helped me realise cleft is just something that’s in the background.”

Reflecting on the teasing she experienced in school and how much has changed for her over the years, Carol considers what advice she might offer a young person affected by cleft who is trying to build up their own confidence.

“I’d start by explaining that today there is more help and it’s marvellous what surgeons can do,” she says. “And then I’d say ‘This is you, you are perfect – in your parents eyes too! Just be you and don’t let anyone bring you down.”

Recently, Carol began taking singing lessons and is finding learning and developing the breathing work involved particularly interesting. The inspiration behind these lessons is her and her friends’ fondness for karaoke nights, something Carol has always refused to take part in in the past.

Just be you and don’t let anyone bring you down.

“I’m a typical Virgo,” she jokes. “Everything’s got to be done right or not at all.”

On her next holiday in September, she’s hoping the lessons will encourage her to take to the stage.

“As I’ve got older I’ve learned so much and so much has changed. Although,” she laughs, “I still can’t drink fizzy pop too fast!”

Thank you to Carol for sharing her story with CLAPA.

Do you have a story to tell? You can share your #CleftStory by following the link below, or email [email protected] to find out more.