Michelle’s son Benjamin was born with a cleft palate. Michelle reflects on their journey so far, from diagnosis to surgery, and the challenges they overcame.

Benjamin decided to come four weeks early, which was a surprise. I noticed when he was crying that there was a hole where his palate should be. Being four weeks early, I didn’t know if this was normal or not, so I just brushed it off.

We had to stay in hospital for three days so he could get antibiotics with him being born early. All through the night and the next morning, he wasn’t feeding very well, and an HCA came to help us. I asked her to look in his mouth as I’m sure he didn’t have a palate. It was then that she looked and took him out to a midwife to have a look.

From then, the care from our cleft nurse was brilliant, and she came out to see us the next day. Of course, we were worried, wondering what issues our son may grow up with. She put our minds at ease, gave us bottles to help him feed, and organised when she would see us again. The nurse was brilliant from the start; nothing was an issue; we could text her with any concerns, and she would get back to us or come out and see us.

She helped us with our feeding problems or worries; honestly, nothing short of fantastic. I remember the first time feeding and seeing food come down Benjamin’s nose or when he was sick and coming out his nose. I dreaded every feeding time because he would just cry when the food came down and get watery eyes because of the burn.

We eventually got a better system going and didn’t have any other cleft-related problems. Benjamin had his operation a week before his first birthday. I don’t think anything can prepare you for seeing your baby have an operation. My husband took care of Benjamin the most after his operation because I couldn’t handle it. I thought I would have handled it a lot better than I did. He had his operation and came through a few complications in the first 24 hours, but after that, he was brilliant.

He had his operation and came through a few complications in the first 24 hours, but after that, he was brilliant.

We came home and had to put socks on his hands because he sucked his fingers. I’d say after seven days, he was back to himself, in a way.

One thing we were not prepared for was the change in Benjamin’s personality. Before the operation, he was friendly and always smiling. For the next 18months, he would cry all the time, not want to leave my side; he became fearful of nurses/doctors and just did not seem happy. We have to remember that although they are little, it’s hard on them too. 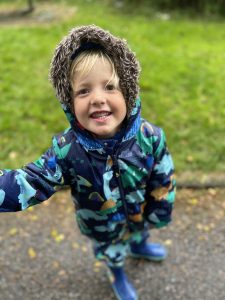 I now have my cheeky little boy back. Benjamin is nearly four and has had no other cleft-related issues after his repair besides a little speech delay and hard time pronouncing things, but he will get there in time.

I now have my cheeky little boy back. Benjamin is nearly four and has had no other cleft-related issues after his repair besides a little speech delay and hard time pronouncing things, but he will get there in time.

That’s the story of Benjamin. And again, the fantastic help from our cleft nurse made this a whole lot easier. She was a massive help to us both. I will be forever grateful to her and everything she has done for us.

We are very grateful to Michelle for kindly sharing her story with us. Have you got a story to tell? We’d love to hear from you! Get in touch here.